How Can a State Recruit Industry Without Workers?

The State of Alabama is enjoying massive growth in manufacturing, especially in the automotive sector. Companies like Mercedes-Benz, Hyundai, and Toyota are building and expanding factories, but will they continue to do so if there aren’t enough trained workers? State leaders know they need to recruit and train thousands of workers. They are increasingly offering workforce assistance as an economic incentive to new and expanding businesses, which includes workforce recruitment and training.

This sounds great on paper, but how do state agencies connect with these potential workers?

As workforce development professionals know, it can be a serious challenge. A frustrating statistic says that over half of all persons that consider themselves underemployed are not actively seeking better opportunities. 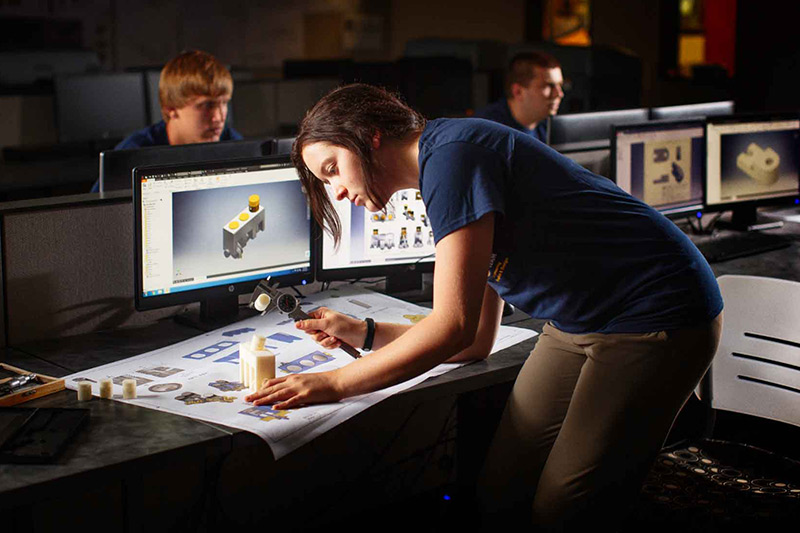 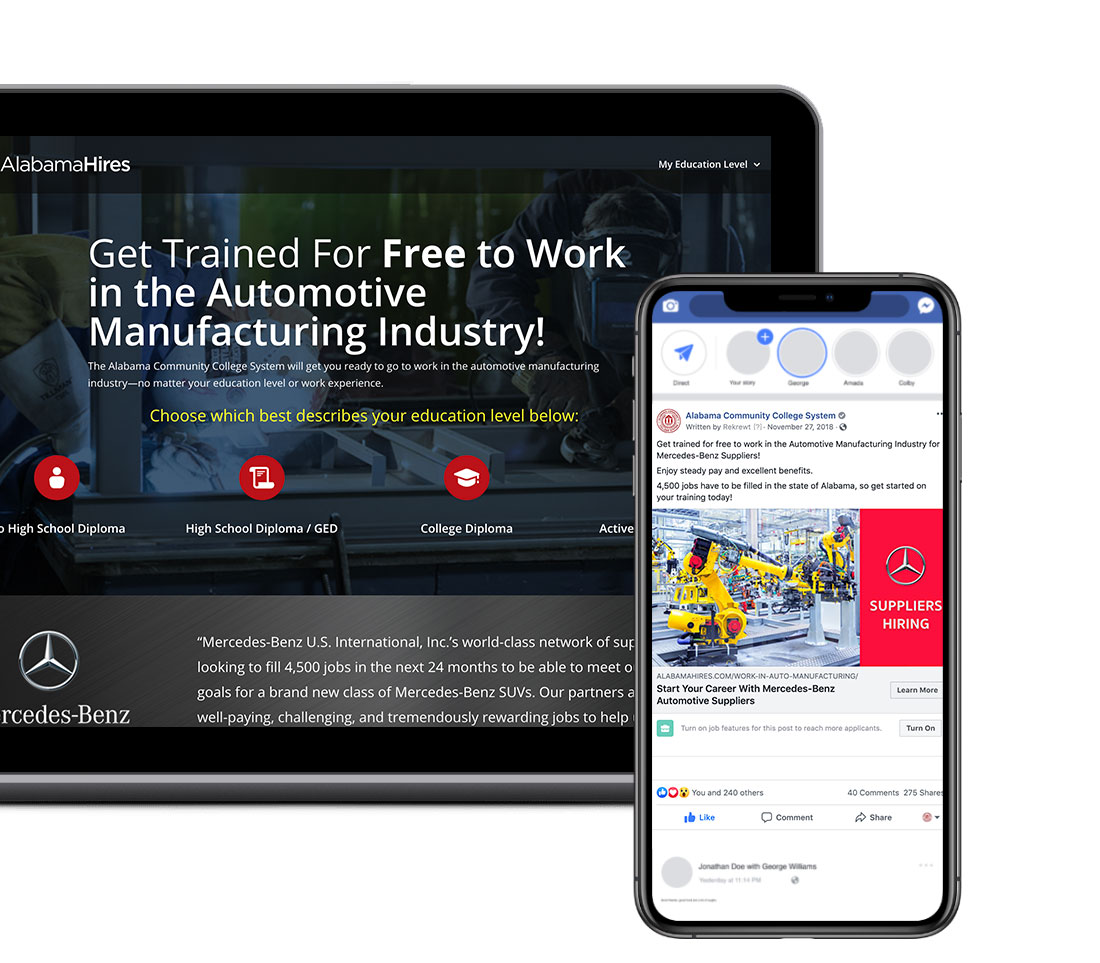 Proactive Recruiting is Essential to Maintaining a Worker Pipeline

The State of Alabama, having already worked with us on multiple projects, hired Rekrewt to recruit thousands of prospects for positions within the automotive manufacturing supply chain. Specifically, the state needed people to achieve Certified Production Technician (CPT) and Certified Logistics Technician (CLT) certification, thanks to their partnership with the Manufacturing Skill Standards Council (MSSC).

Prospects would be referred to a nearby community college to complete their necessary training. As such, we worked closely with the Alabama Community College System.

Each of these groups is at very different stages in life, and needs to be communicated with in a unique way. Plus, they each require a different amount of training in order to become certified and ready to work.

We Used Many Platforms for Maximum Reach

We developed micro-campaigns for each group, reaching them on platforms such as Facebook, Instagram, Snapchat, Google Search, and much more. Instead of a generic, mass-market approach, we targeted each group with personalized ads and content that were made just for them. Our approach was so unique that local television stations voluntarily covered the campaigns.

Interested persons that engaged with an ad were funnelled to a landing page built specifically for them based on their status (graduate, non-graduate, veteran, etc.). They were shown personalized content and “next steps” specific to them, and the data shows that they greatly appreciated this approach. 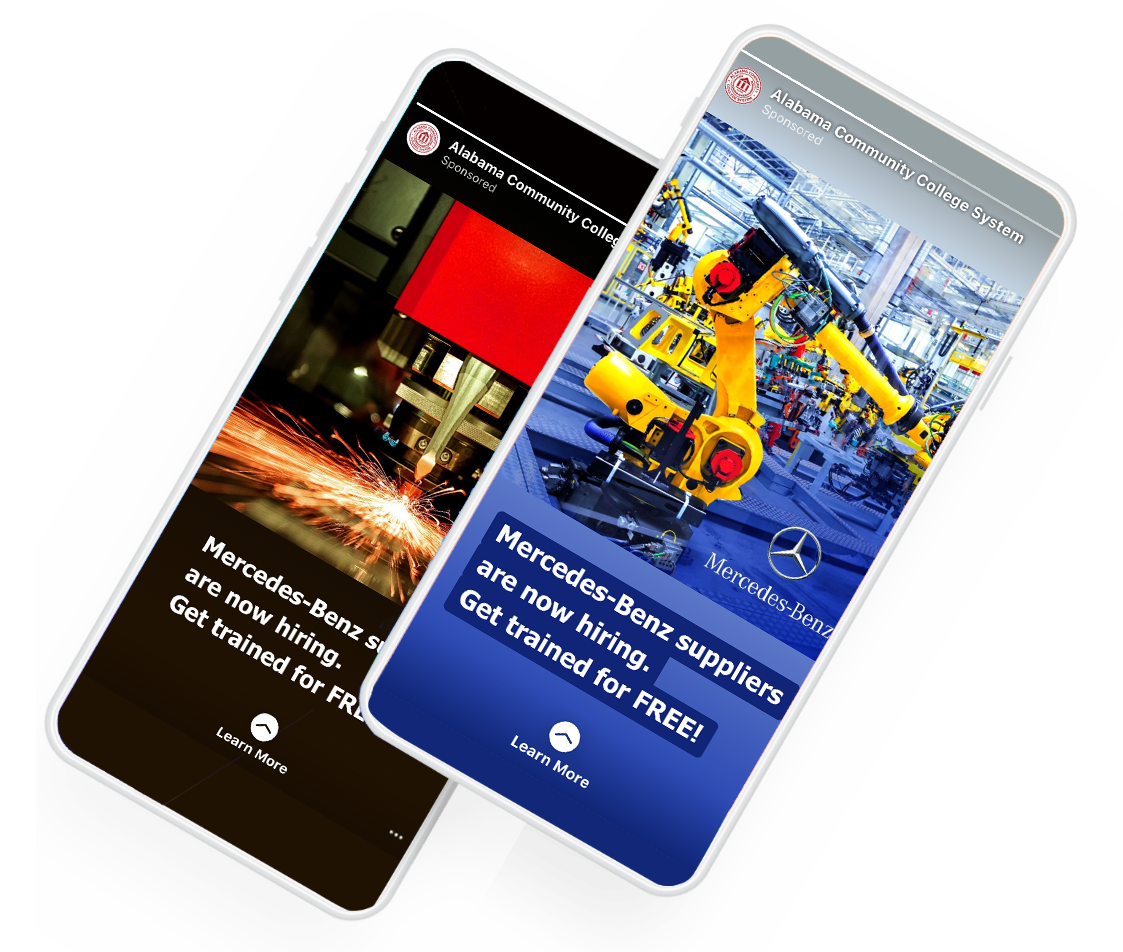 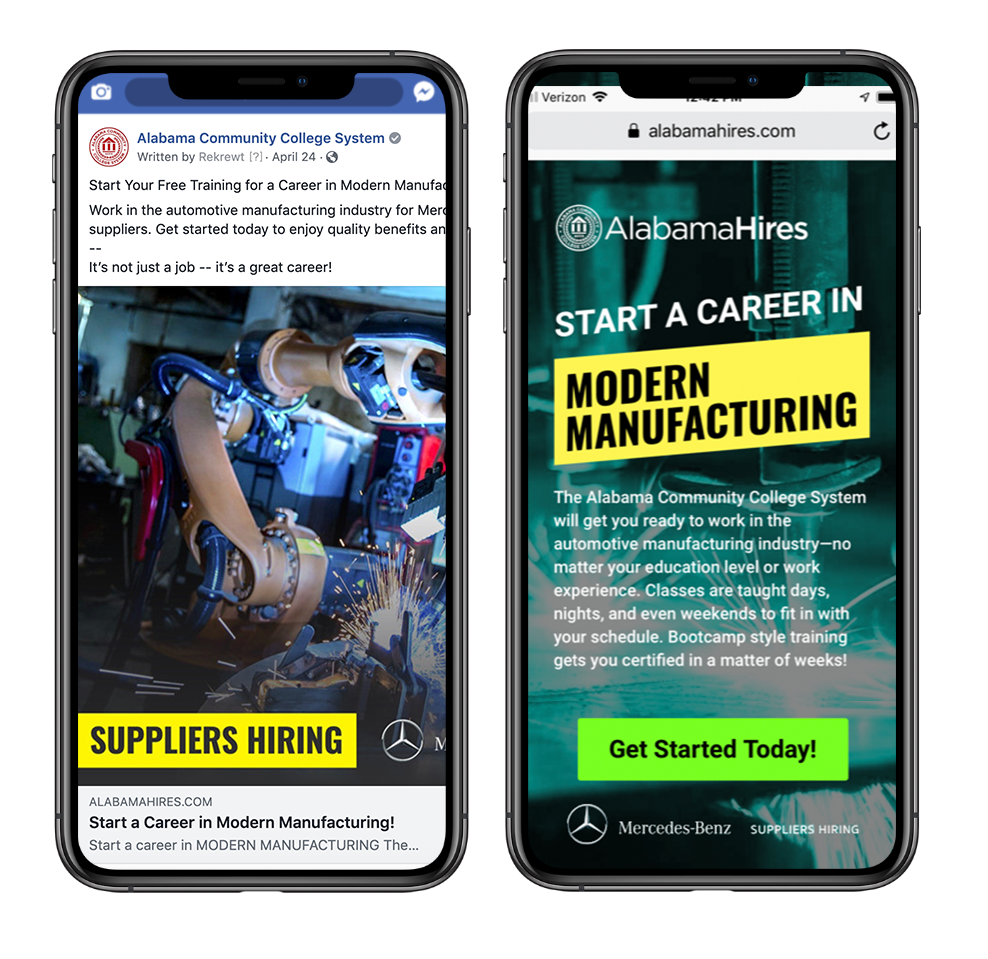 Results were difficult to predict, as nothing like this had ever been attempted in Alabama (perhaps anywhere). However, everyone is very pleased with the results so far.

The 5,000th prospect was generated less than five months into the campaign. Just shy of the one-year milestone, more than 12,500 prospects had been generated. Alabama isn’t exactly known as a densely populated area, so averaging more than 1,000 prospects per month, from a ten-county region, is seen as a great achievement.

As companies within the state are able to benefit from a steady flow of trained workers, they have incredible peace of mind, and are able to continue their growth. A dependable workforce is incredibly important to the State of Alabama, and we’re ecstatic to be a part of the manufacturing and economic renaissance taking place!

Let’s discuss your recruitment goals and see if we’re a good fit.